As a galactic emissary for anchoring in new ascension energetics into Mother Earth, my next mission was to go to Tucson AZ in the winter of 2017. The purpose of my previous missions was to help clear out old energies, and to activate new portals for ascension.

When I first came to the Tucson area, the mountains, especially the Catalina Mountains, would telepathically communicate with me. I could see powerful energies coming off of the mountain areas which were in communication with me.

In March 2017, at a local metaphysical group in Tucson, I gave a presentation about how Angelic Merkaba sacred geometry is a catalyst in the ascension process. The house was located at the base of the western part of the Catalina Mts. At the end of my talk, I unexpectedly felt the energy in the room and myself shifting, and grow in intensity. Then the grandmother spirit who channels thru me in light language, started to speak and be a conduit to anchor in the first of many energy vortexes in the Tucson area. Spirit told me that this vortex was the first of many vortexes I would be creating for this area.

Over the coming year, I was spiritually guided to connect with the powerful energies of the Catalina Mts, Rincon Mts, Tucson Mts, and the Santa Rita Mountains, being a physical conduit for clearing work and activation of powerful earth healing vortex energies.

One experience occurred Feb 1, 2018, while I was driving northward on I-10 from Vail. The tallest of the Tuscon Mountain peaks, which were NW of I-10, presented itself to me. I could see yellow energy flowing out of the base of the mountain. It said that this event had waited until after the January 31st full lunar eclipse had occurred. The yellow energy was a releasement of stagnant energies.

Later in February of 2018, I had an experience of connecting with a special energetic area in the eastern part of Tucson, at the foothills of the Catalinas. This location was first presented to me through hand dowsing of this area on a map, then energetically traveling there in meditation/vision, and then physically going there to work with this vortex point on April 4th. For a more detailed blog account of the first introduction to this area, go the blog post titled: Tucson Portal #3 – April 2018. The conclusion of working with this vortex is written about in the following paragraph.

On March 31, I was guided to activate a vortex point near the foothills of the Rincon Mt area, to the north of the tallest Rincon mountain peak, and NE of Vail. I saw Big Bird (an interdimensional being of light who looks like a very huge golden eagle, who has accompanied me on 3 previous galactic earth healing trips). He was now showing up to help create this vortex point which was energetically connected to the Rincon Mts.

On April 4th, I went to Bear Canyon trail area (the 2nd Catalina Mts connection point). Using spiritual guidance, I was guided to the existing vortex area. I saw a large white star in the sky, which I knew symbolized the galactic energies helpful connection that was going to help with this process. I saw and felt a blanket of negative low vibrational energy that was covering the land. Grandmother spirit came thru and proceeded to facilitate the processing of old negative energy to be inverted into Mother Earth, where it was to be transmuted. The white star galactic energy that had been waiting overhead, then replaced that old energy, with a new upgrade of galactic energetics being anchored into this area. This was the first time I had experienced negative energies that were existing on top of the ground, being sent into Mother Earth to be transmuted.

On April 6th, near the Tucson Mts, in the NW Tucson area near Gates Pass, from going west on Speedway Road, I saw and connected with divine mother energetics, activating a yellow bowl of love and light vortex energies.

On April 22nd, the final Tucson area earth grid of light points was completed and anchored into the valley, connecting all the mountain vortex energy points. I was intuitively guided to drive to an area between Vail and I-10, to a high point on a hill, in a subdivision south of Wentworth Road. The street name had the word ‘Bear’ in it, which was a coincidence of the Bear Canyon road name. There evidently is a connection to the spirit power of Bear and these new vortex energy points. Using my sacred wooden staff, and grandmother spirit coming thru me to actually facilitate the energetic anchoring process, the 2 Catalina vortex points, the Rincon Mt point, the Tucson Mt. vortex point, and the new and last vortex point of the 2nd highest peak of the Santa Rita Mts (Hopkins Mt., south of Green Valley), were all connected at this last point.

When I plotted these 6 points on a map, they create a ‘clockwise spiral of energy’, which looks similar to the Golden Mean Spiral pattern. Further analysis of the Tucson vortex points and any sacred geometry pattern connection is currently being investigated. Coincidently perhaps, is the fact that when the Angelic Merkaba is spun clockwise, it produces the highest vibration of energy.  In 2014, two galactic light beings appeared to me and showed me a special configuration which was a ‘clockwise spiral of energetics’ using the Angelic Merkabas, which would produce a powerful portal of energy. When I have used this special vortex pattern in my classes, divine beings of light have shown up to help facilitate higher vibrational knowledge and attunements to happen.

I was told that the Catalinas have been holding the sacred space and power of this valley area for a long time, and now the Santa Rita Mt point was being activated for the purpose of ‘re-establishment of the ancient primordial blueprint of this land’! The Santa Rita Mts were now taking a prominent power shift position in the whole valley energetics.

At the Santa Rita Mountains vortex point, it activated the opening of an ‘ancient primordial divine blueprint’ for the Tucson area.

Clockwise Spiraling of the 6 Vortex Points: 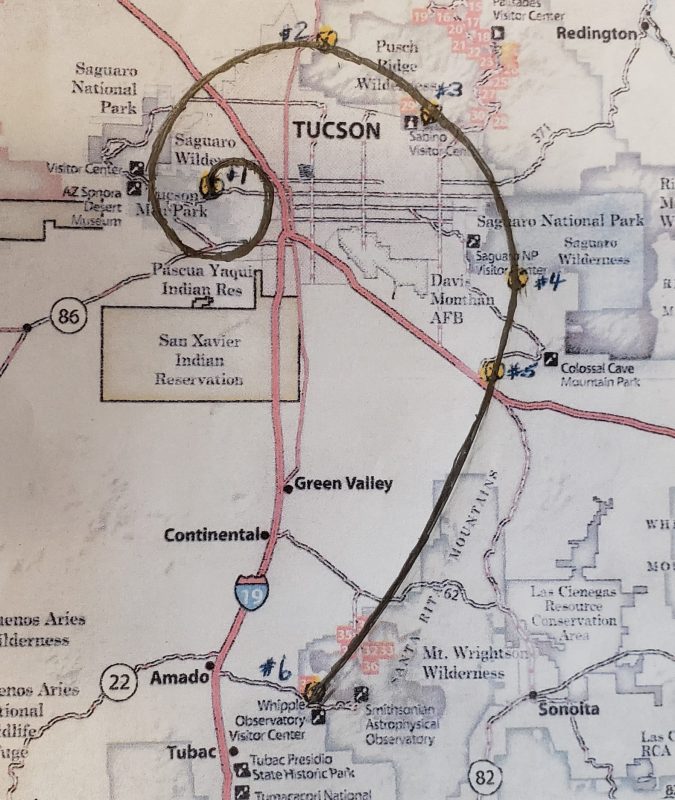 Part of my spiritual mission has been to be a light worker that is able to anchor in the ‘original divine blueprints’ of areas. In 2016 in Phoenix, I was directed to do ceremony to activate that areas primordial blueprint energetics, and I saw the whole valley as a lush beautiful green landscape with no humans at all. This original divine blue print work has also been done at Angel Fire, NM.

At other sacred sites, I have done various energetic transformations of those locations to help clear and raise their vibration. Some of them are:  Yucatan Mexico Mayan Temples; Stonehenge, Avebury, St Michaels Mount (Michaels and Mary Ley Lines), Glastonbury, and the Hurler stone circles in Cornwall, England; ancient Mound Builder sites in America and Serpent Mound in Ohio; America’s Stonehenge in New Hampshire; Mt Shasta CA; Chaco Canyon NM; and the Great Pyramid and temples in Egypt. Sometimes my mission was to re-connecting sites to ancient Mayan energies or connecting the sites to Orion constellation energetics. I am continuing to study the metaphysical understanding of the ability to anchor in various types of energetics with this earth grid light work. I will keep you posted!

Important points regarding this type of earth light work: 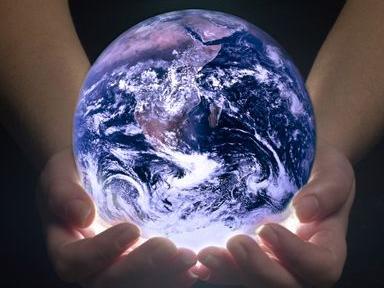